This easy chocolate pie recipe is a simple to make, no bake pie. Importantly, it is dee-lee-cious!

...and naturally, full of yummy calories, to be consumed with relish! 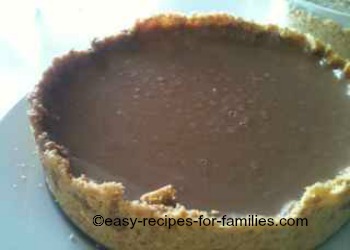 Now, I know you're looking at this recipe and thinking there's a whole lot of steps here. But really, there's not.

It's just a matter of making the crumb crust - I go into the detail of how you make one and it really is easy.

Then, you put all the ingredients for the chocolate filling into a saucepan and combine it.

There are two parts to this recipe - firstly make the crumb crust, then make the filling.

Serve this for afternoon tea and you'll be guaranteed there'll be none left for dessert.

There are quite a few steps in this easy chocolate pie recipe, but really, it is a simple procedure. The traditional recipe calls for the whipping up of egg whites and folding it into the chocolate mixture. Naturally, as I only cook easy recipes, I omit this step and the end result is still a lovely, light chocolate pie

If you'd like to try the traditional method of folding in egg whites to get a lighter chocolate filling, this is how you would separate the yolks from the whites.


How to separate egg whites from yolk:

Get two containers at the ready - we use two coffee cups. Have them sitting side by side.

Crack an egg in half gently and immediately hold it UPRIGHT with the round side of the egg pointing down. You can remove the pointy end of the egg.

Allow the whites to run free into the cup. The yolk will sit in the half of the shell.

When the egg white has run out, tip the yolk into the other cup.

Repeat for each egg.

Whip the whites till it is light and foamy. It will look like uncooked meringues. Fold the egg whites into the chocolate mixture.

Easy Recipes For Treats Your Family Will Just L-O-V-E!